Sick of the Gas shortage in this cold, cold winter? Brent Butt finally decided to get animated about it.

Corner Gas, one of the most popular sitcoms in the history of Canadian television, is being rebooted in animated form. The Comedy Network (owned by Bell Media) confirmed on Monday that this new version of Corner Gas will begin pre-production next month in Toronto and Vancouver.

The 13-episode, half-hour series is scheduled to air sometime in the 2017-18 broadcast season.

Most of the original stars of the show will be back to voice their own characters, save, of course, for Janet Wright, who passed away last month. Wright’s family has given its blessing for the Emma character to carry on, and voice casting for the role currently is underway

Corner Gas originally aired from 2004 to 2009, and it proved that Canadians actually will watch a home-grown sitcom in big numbers, as long as it’s the right home-grown sitcom. A made-for-TV movie followed in 2014.

The switch to animation will be interesting, though. Many shows have tried it, some successfully, others not. But the bulk of those live-action-to-cartoon projects largely were targeted at kids.

In terms of primetime TV, a recent example on the Canadian landscape that didn’t work very well was Bob & Doug, which was based on the SCTV characters that had been created by Dave Thomas and Rick Moranis back in the early 1980s. The animated version debuted on Global in 2009, but it just wasn’t funny enough to really catch on with the viewing public, and it disappeared swiftly. Perhaps too much time had passed.

But with Corner Gas more fresh in people’s memories, and with Butt at the helm of the animated foray, the hope is that the new version will have the same humour and charm that made the original such a long-running hit in Canada.

On a personal level, I hope the animated Corner Gas follows the King of the Hill cartoon model, meaning, it largely is grounded in the real world. Like, I don’t necessarily want Hank to suddenly have regular super powers or anything like that. Then again, Fred Ewanuick, the voice of Hank, probably wouldn’t mind.

Prospects of a heroic Hank aside, it sounds as if Butt is enjoying some of the unique creative freedoms that cartoons provide.

“I’ve always loved animation,” Butt said in a statement. “After high school, I was accepted into the animation program at Sheridan College, but I chose to pursue stand-up comedy.

“It has been a huge amount of fun creating animated scripts for our Corner Gas gang. We used to come up with some pretty wild fantasy sequences and bizarre flashbacks in the old story room, but were limited with what we could do in the real world. Buckle up, we’re not in the real world anymore.”

With those very differences, though, I do wonder about the name. When the time comes, will they actually call this new version Corner Gas, just like the original? That could cause some confusion, at least for my on-screen channel grid. What about calling it, say, I don’t know, The Wanda Show? (suggestion eagerly provided by Nancy Robertson).

But while we’re on the subject of animation, do you know another live-action show that maybe should think about wrapping it up and trying an animated version? How about The Big Bang Theory?

Those actors are at the contractual stage of their careers where they cost a heck of a lot of money. And if you’ve seen any recent episodes, many of the original actors seem quite bored of the whole thing, in the middle of Season 10. Wolowitz has a baby now, for the love of God. That right there might be proof that the show has gone on too long.

For now, though, Canadians can be happy that even though the old Corner Gas sets have been dismantled in Rouleau, Sask., Corner Gas has arisen in a new form that is immune to physical destruction. 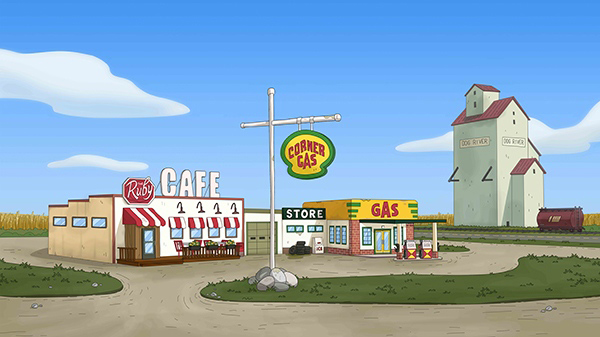