‘Everything in this conflict is about control’: Violeta Ayala Talks ‘Cocaine Prison’

Cocaine Prison, the latest documentary from Bolivian born indigenous filmmaker Violeta Ayala, provides a shocking insight into the world of drug trafficking in Bolivia. Filmed over four years, Cocaine Prison was shot inside a notorious, over-populated and poorly maintained San Sebastian prison. Going beyond documentary conventions, Ayala uses footage filmed by the prisoners themselves, putting her subjects directly in charge of their representations.

The film follows Hernan and Daisy, two teenagers, whose family grows coca leaves to make a living. As Ayala says, the relationship between the coca leaf and cocaine is the same as between grapes and wine. However, while growing coca is legal in Bolivia, cocaine production and trafficking is not.

In order to raise some money for his band, Hernan decides to transport cocaine to Argentina. He gets caught at the border and is sentenced to eight years in San Sebastian prison. While in prison, Hernan meets Mario, whose case explicitly illustrates the fraudulent criminal justice system when it comes to poverty and drugs. Without sufficient money for bail, Mario spends three years in prison prior to even having a trial.

In her documentary, Ayala produces a genuine and humanizing portrait of the marginalized convicts, challenging common misconceptions about the war of drugs. She harshly criticizes the corrupt and flawed system, which imprisons the poor and vulnerable and protects the guilty elite.

Ahead of Cocaine Prison’s world premiere at TIFF, POV talked with Ayala to discuss her experience filming inside San Sebastian and hear the filmmaker’s thoughts on the international drug trade and its impact on Bolivia and its indigenous communities.

POV: Why did you decide to film inside San Sebastian prison?

VA: I went to San Sebastian prison because I wanted to make a film, which would tell a story about the drug trade and the war on drugs from the perspective that I knew and understood. I was very tired of the widespread idea of “Narcos”, drug lords and criminals like Pablo Escobar. Everything about them is so glamorized and misleading. It doesn’t reflect the reality of the international drug trade. The motor of the drug trade is people like Hernan and Mario. They represent the majority and this (Cocaine Prison) is the story of the majority.

POV: A number of scenes in your documentary are filmed by prisoners using their own devices without your supervision. When and how did you come up with an idea to give cameras to San Sebastian’s prisoners? What was their reaction to it?

VA: I think they were very comfortable with what they were doing. The cameras were actually Mario’s idea. He said, “you can’t be here all the time, you really can’t film everything that’s happening in our life. Just give me camera and I will do it.” It gave them so much power because they showed us whatever they wanted to show us. I think they were the ones who had to measure the risk. I couldn’t recall any footage that they didn’t want me to have. I think in Cocaine Prison everyone is very responsible for what they are saying. And if they didn’t want me to know something, they wouldn’t tell me.

POV: While you were making your documentary, you were also teaching English in San Sebastian prison. Were you filming for the four consecutive years that you were teaching there?

POV: San Sebastien prison doesn’t fit into the conventional image of a prison facility. It operates by its own rules, outside the law. What were the challenges of filming in such a place? How were you able to get the footage in and out of the facility?

VA: The first time I went to prison to teach English, a guard told me that “you are on your own, we cannot protect you.” But guards change all the time. With time, they stopped checking my bag or asking us questions about filming, cameras, etc.

POV: Did the guards know that Mario and Hernan were also filming from inside the prison?

VA: No. But a lot of prisoners have their own mobile phones. It’s interesting because in my last film (The Bolivian Case, 2015), which I filmed from prison as well, the prisoners used to call me from their mobile phones, although they weren’t allowed to have them. So the idea that prisoners have nothing is not true. It’s a prison, and they are all humans; so people have mobile phones if they can afford it.

POV: Why did you choose Daisy, Hernan and Mario to be your main subjects and how did you form relationships with them?

VA: It was very important to me that Daisy, Hernan and Mario were Indigenous people, who came from the place where the coca leaf grow and that their parents were farmers. It was a good impression to portray in a film. They were also beautiful characters.

When I first saw Hernan, he was so scared that he ran to the class because it was the safest place in the prison. He was a very young and sweet boy but he didn’t play a victim’s role and that’s what I liked about him. He then introduced me to Mario; they were friends and had this great chemistry together. Mario has never been to an English class and didn’t even know how to read or write. We formed a really strong relationship with them.

And then we met Hernan’s sister Daisy; she was this really young girl, who was very upset with everything that has happened to her. When I met both Hernan and Daisy, they were in a really low point in their life and had no idea what to do. I didn’t know where their story would take me, but we followed more people, not just them. One guy who we followed ended up being killed even before we started filming.

POV: As a female filmmaker, what were the challenges of filming in a men’s prison?

VA: It was tough to go to prison everyday. Besides drug traffickers and producers, there were also lots of rapists and murderers in San Sebastian. I learned so much about humanity there.

I never actually stayed overnight in prison. I stayed after dark only once; I came out at 7 pm and it was a little bit scary. I also never went to the prison by myself. I always had someone accompanying me. And then the group of students who I was teaching English started walking everywhere with me. They really respected and liked me.

I have never even gone into the toilet in prison so I have no idea how the toilet there looks. And during riots, we were never inside the prison. I knew that it wasn’t the safest place on Earth. I knew all the risks and I am generally a very cautious person.

POV: Unlike many other countries, the drug trade in Bolivia is non-violent and yet, as seen throughout your film, highly destructive. Could you elaborate on how the international drug trade affects Bolivian people, specifically Indigenous communities?

VA: What makes the drug trade valid is the prohibition and the war on drugs. The drug trade on its own just means that you are selling something that someone else wants to buy.

The reason why I am so against the war on drugs is because the only people that I saw in the prison charged with drug related crimes were young, vulnerable, Indigenous and country people. You are not going to change anything by putting vulnerable people in prison. I have never seen “big fish” in the prison.

At the moment, when we talk about the war on drugs and the victims of the drug trade we think of the consumers, most of whom are white. We don’t see black, Latino or Indigenous kids, who sell drugs as victims–we treat them as criminals. And that’s wrong, because they are only doing it because they need money.

Everything in this conflict is about control. I see it as neo-colonialism: the US started the war on drugs to control Latin America, and our politicians enforce drug laws so they can control us too. It’s maddening because it prevents our countries from making progress. Look at Brazil and the amount of people who die there everyday for selling a little bit of cocaine.

The portrayal of the war of drugs in the modern world is also very problematic. On the one side, there are white men, Americans, who are the “heroes,” and on the other side, there is us, people in Bolivia, Columbia, etc. This image makes it look like our lives don’t matter. This portrayal is very damaging, it makes it look like dark Mexicans, dark Bolivians, the middle people, we don’t care about our lives, dying or killing. And that’s why I wanted to show Cocaine Prison from our point of view, to humanize us, to show that we are just people, who ended up in this whole international mess.

POV: In your film you also show a pretty detailed portrait of the Bolivian justice system and the way that the courts and attorneys deal with numerous victims of international drug trade. Would you say that the justice system itself is partially responsible for so many war on drugs victims?

VA: The Bolivian justice system is corrupt by nature because the war on drugs brings corruption. If you have money, you can have better lawyers. If you have no money, you will be in prison forever. There are too many cases, but not enough judges or prosecutors.

Our justice system has always worked by the rule that you are innocent until you are proven guilty. But according to the law, which was imposed in Bolivia by the USA, in the drug related cases, you are guilty until you are proven innocent. It doesn’t matter if you are caught with one gram or two kilos of cocaine, you are committing a “crime against humanity.”

It’s interesting because I have never seen people in jail who got caught transporting kilos of cocaine. They are able to have lawyers and trials. And the justice system works this way in most countries in Latin America and it could not have been different because of the war on drugs.

Both in Bolivia and Norway, as shown in my previous film, the poorest, more vulnerable people are paying the price for the war on drugs. If we really want to fight the war on drugs, we should target the “big fish” instead of vulnerable people. You just need to follow the banks, and the money to follow what’s happening, but nobody is doing that because drug money is feeding the world’s economy. 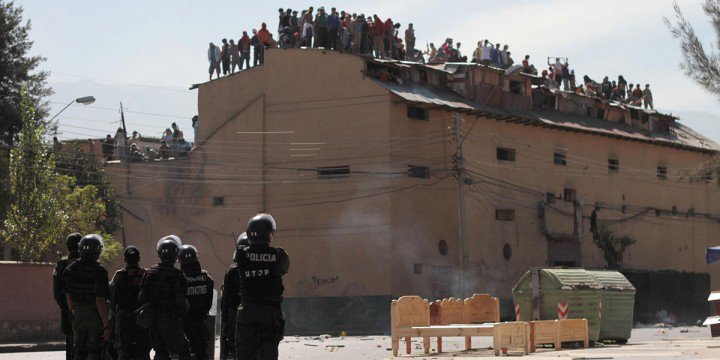