Are you ready? This year’s Toronto International Film Festival runs from Sept. 7 to Sept. 17. It’s the best time of year for movie lovers in Toronto, and perhaps one of the most stressful. What should you see? Where should you eat? How can you get a picture with George Clooney? The Globe and Mail’s Dave McGinn breaks it all down.

How to get tickets

Worried that you haven’t locked down tickets yet? Don’t be. Single tickets don’t go on sale until the morning of Sept. 4. Meaning you still have time, but don’t dawdle. Hard-core cinephiles and other festival regulars likely began strategizing which movies to see ever since the festival began announcing this year’s lineup last month. Yes, those with special memberships can score tickets early, but there will be plenty left over for the public. As for cost, expect to shell out anywhere from $18 for a weekday daytime screening (those same screenings can cost as little as $10 if you are 25 or younger) to $59 for “premium” screenings. Tickets can be purchased at tiff.net or by phone at 416-599-TIFF (or toll-free at 1-888-599-8433). Or buy tickets in person at one of three box offices (See tiff.net for details). The venue box office opens one hour prior to the first screening of the day.

How to decide what to see

Even though the festival has cut its lineup by about 20 per cent this year, it still boasts something for everyone. Do you want to see the movies with the most buzz (Battle of the Sexes, based on the tennis match between Billie Jean King and Bobby Riggs, and Darren Aronofksy’s Mother!, starring Jennifer Lawrence, among them)? Or perhaps you are hoping to see a film you’ll probably never get to see in theatres? Thankfully, tiff.net helps manage sorting through the possibilities by allowing you to search by genre, region of interest, languages, programs and a handful of other handy categories. Search the site and keep your ears open. Festival-goers love to talk about surprise hits as much as they love to warn you away from stinkers. Industry buzz isn’t always reliable. Word of mouth can help you discover a gem that otherwise might not be on your radar. Outside of official channels, the folks attiffr.com have also pretty much perfected the art of making a festival schedule.

Where to spot stars

The celebrity factor at TIFF always ebbs and flows. Personally, I ask, is this a Clooney year or not? This is indeed a Clooney year. Also set to attend is an impressive list of stars that includes Jennifer Lawrence, Drake, Emma Stone, Matt Damon, Angelina Jolie, Idris Elba, Kate Winslet, Benedict Cumberbatch, Javier Bardem, Daniel Craig, Jessica Chastain and many other gorgeous, supertalented A-listers. Their premieres are the best place to get a glimpse of them, since it’s the one place you know they are guaranteed to be. Get there early and get as close to the red carpet as you can. Make sure your cellphone or camera battery is fully charged. And remember, be polite. Yelling is expected – how else can you get their attention? But yell, “Mr. Clooney, I love you! Can we please get a selfie?” Not, “Hey, George! Get over here.”

Where to eat between screenings

Almost all of this year’s 10 venues are within walking distance of one another and close to great eats. Montecito (299 Adelaide St. W.) and its California-inspired cuisine has become the unofficial restaurant of the festival since opening in 2014. It’s co-owned by screen legend Ivan Reitman, is a stone’s throw from the TIFF Bell Lightbox and is a favourite among celebs. David Chang’s Momofuku (190 University Ave.), also smack dab in the festival’s epicentre, is a guarantee for a delicious meal and possible star sightings. Drake One Fifty (150 York St.) has good proximity going for it, and while it’s somewhat upscale, it won’t break the bank. Do you know anyone who’s a member of the Spoke Club (600 King St. W.). Pester them for a meal! The food is good and stars love it there. And if you’re just looking to wolf something down quickly, there is a great hot dog cart at King and John Streets. 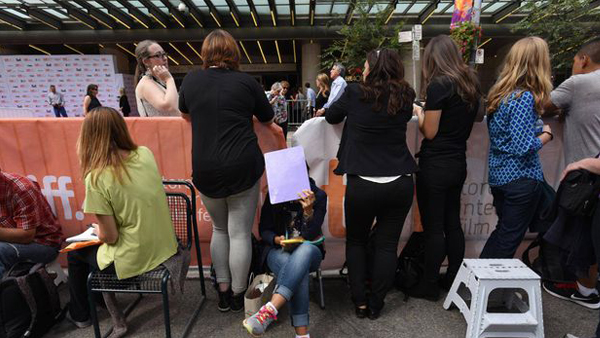